Hostex 2020 is kicking off this Sunday the 1st of March and is running until the 3rd. There’s loads of exhibitors to interact with, seminars to attend, culinary and coffee competition action to watch, and industry mavens to interact with. The seven Hostex 2020 Ambassadors, handpicked and representing different facets of the industry, will be on the show floor at different times throughout the three-day event.Read below to find out more about each ambassador, and where you can find them throughout the show.

Most of the ambassadors will be there to kick off the show on Sunday the 1st of March at 09h30, as Nick Sarnadas and Gary Corin from Specialised Exhibitions open the event. The ambassadors will also be available at the Premier Lounge on Monday the 2nd of March from 10h00 to 11h00 for a Hostex Ambassador Meet and Greet. You’ll also be able to hear what they have to say at IndustryLIVE! where most of the industry mavens will be taking part in the seminar.

James Khoza is Executive Chef at Tsogo Sun’s Sandton Convention Centre, where he has been for the past seven years, and the first South African born and trained President of the SA Chefs Association since its inception more than 44 years ago.

Join James, together with Chef Franz de Waal, at IndustryLIVE! on Sunday 1st March at 11h30 – he’ll be presenting valuable insight into sustainability in the culinary industry.

Jackie Cameron, owner of Jackie Cameron School of Food & Wine, has made an indelible mark on the culinary industry and has proved her adage ‘a cut above the rest’. Jackie’s career is peppered with numerous awards and has taken her around the globe. She has also designed a range of chefs clothing and is an award-winning author.

Come and hear Jackie’s inspirational story of her journey and her advice to young women entering the industry in a panel talk in the IndustryLIVE! Theatre at Hostex, where she will be joined by industry greats such as Karen Short, founder of By Word of Mouth; Candice Philip, award-winning chef from Grei at The Saxon; and Nadia Barnard of Capsicum Culinary Studio, among others. The ‘Power Women in Hospitality’ panel discussion takes place on Monday, 2 March from 11h00 to 11h45. 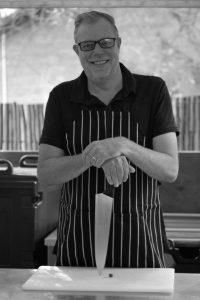 Arnold Tanzer is a highly skilled chef with over 20 years’ experience locally and internationally. Embracing a new challenge, Arnold became a producer for MasterChef South Africa and Reza Mohammed’s cooking show. But cooking is where his heart is, and he opened his own full-service catering company, Food on the Move, operating in both Johannesburg and Cape Town, creating no-fuss menus for any and every kind of event.

Join Arnold Tanzer at Hostex 2020 where he will be presenting more valuable learnings from a multifaceted career in hospitality – Between the dream and the dirty dishes – at IndustryLIVE! on Tuesday 3 March at 12 noon.

David Walstra is Founder of Thirdspace and Co-founder of SEAM Coffee roaster and wholesaler, and collectively they aim to bring specialty coffee to a broader audience while also helping to build community, at Thirdspace and in the farming communities where their coffee is sourced.

Join David Walstra at Hostex 2020 where he will be presenting more valuable and interesting insights on the sustainability of coffee – at IndustryLIVE! on Monday, 2 March at 15h00.

Join Iain Evans at IndustryLIVE! as he discusses the Barista Wage Calculator – an online tool that will help both baristas and employers find common ground when it comes to wages, wage negotiations and incentivising both parties to pay more for skills gained. He’ll be talking on Monday, 2 March at 15h30.

Franz de Waal is a celebrity chef, catering specialist, entrepreneur, philanthropist and helicopter pilot, with over 20 years of experience in the food and hospitality industry. He runs a catering company called Hashtag Hot Caterers, based in Johannesburg, which has been operating for over ten years.

Join Franz de Waal at Hostex 2020 where he, together with James Khoza will be presenting valuable insight into sustainability in the culinary industry – at IndustryLIVE! on Sunday, 1 March at 11h30.

Vinny Maharajh has years of experience in guest relations. He has spent six years as Head Concierge at Intercontinental Johannesburg Sandton Towers, and a year at The Lost City, re-joining Tsogo Sun in 2014. His academic achievements through Tsogo Sun Academy, include Management Skills Builder, and Nine Conversations, a leadership training programme. Vinny is the recipient of the highest recognition a concierge can receive globally – Les Clefs d’Or (the Golden Keys), one of only 14 in South Africa to have achieved this.

*IndustryLIVE! schedule is subject to change. Click here for the full schedule and check seminar times on the day.

Hospitality Management graduates in demand across sectorsIndustry Focus, Side Bar