The Marine Hotel in Hermanus is celebrating World Vegan Month (November) with a new, plant-based menu created by Executive Chef Rudi Blaauw. Part of The Liz McGrath Collection, The Marine is one of South Africa’s most spectacular seaside hotels and is a proud member of Small Luxury Hotels of the World.

The 1st of November is recognised globally as World Vegan Day to mark the establishment of the Vegan Society in 1944. It was in those early days that the phrases ‘vegan’ and ‘veganism’ were first coined. Now, more than 70 years later, the benefits of veganism for humans and the natural environment are widely known and chefs all over the world are preparing creative vegan menus to meet the increasing demand from health-conscious diners.

Newly appointed as Executive Chef at The Marine’s famed Origins Restaurant, Rudi Blaauw says he focuses on the quality of the produce, letting that shine and allowing creativity to follow. Blaauw brings with him extensive experience gained at two Relais & Châteaux properties, including five years as Executive Sous Chef at Delaire Graff Estate’s famed Indochine Restaurant in the Cape Winelands, followed by his most recent tenure as Executive Chef at Ellerman House in Cape Town. 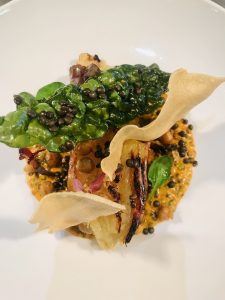 The vegan a la carte menu at The Marine includes options such as Tandoori cauliflower steak with spiced black lentils, sultana relish and chickpea crisps; or Quinoa & baby beetroot salad with apple, walnuts, fennel, mustard vinaigrette and celery as starters.

A choice between a selection of Sorbets with seasonal fruit and coconut gel; or Coconut frozen gateau with date & pecan crust and pina colada gel, ends a light, healthy and delicious meal on a sweet note.