The celebrated Stellenbosch winery that spearheaded a Pinotage revolution in 1994 by releasing South Africa’s very first Cape Blend is once again among the champions of this year’s Perold Absa Cape Blend Competition.

Indeed, it has been an exceptional year for Simonsig, which has marked several prominent milestones. These include the 50th anniversary of its Kaapse Vonkel – the wine that pioneered South African Cap Classique; and, the 50th anniversary of the country’s first wine route in Stellenbosch, co-established by Simonsig Estate founder and Malan Family patriarch, Frans Malan.

Now with the release of the Cape Blend Competition results last week, the judges panel included among its final Top Five, the winery’s Frans Malan 2017.

The wine came into being with its release in 1994; the 1991 vintage being the first Cape Blend in South Africa. For that wine, Frans’s son, Johan, employed the same components as the most recent expression to make a special wine for the Cape Winemaker’s Guild.

Today, the term Cape Blend is regulated, and the style refers to wines of which the dominant component is Pinotage. The variety was developed in South Africa in the 1920s and is now perennially celebrated on October 9 – International Pinotage Day. The Perold Absa Cape Blend Competition annually seeks to recognise the best expressions of these wines.

“It is significant to be crowned one of the Top 5 because there are some super wines being made in this style in the Cape at the moment,” says Johan Malan, the current Diners Club Winemaker of the Year. “The competition is very tough.”

The victory of the Frans Malan 2017 follows a similar achievement by the wine’s highly praised 2015 vintage, which was also a Top Five winner.

A great vintage for Simonsig

The 2017 however, emerged from a distinctly different growing season. Drought conditions provided many challenges, but also grapes with small berries, great fruit intensity and concentration.

The wine was vinified and spent 13 months maturing in mostly French oak barrels prior to bottling. Along with Pinotage, the final composition of the blend comprised Cabernet Sauvignon and a touch of Merlot.

“Pinotage develops an aromatic sweetness with maturation,” says Johan. “The role of the Cabernet Sauvignon is to provide structural backbone. It also contributes a classic dry finish, making it great with a variety of dishes.”

“The Merlot is a fantastic variety in any blend as it brings juicy berry fruit and chocolate notes as well as supple, soft tannins. Together, the varieties form a symbiosis that makes the wine more than the sum of the parts.”

On the nose, the 2017 shows a burst of brambleberry and dark cherry with touches of vanilla and pencil shavings. The palate has a pleasant freshness that carries the fruit for a lingering finish.

Pinotage has a very long record at Simonsig. The first Pinotage was planted here in the late 1960s. When the winery started bottling its first wine in 1968, the Simonsig Pinotage was the lead red wine to be released with the 1970 vintage.

The weight of this experience means Simonsig Pinotage is no stranger to success. Its Redhill Pinotage has been one of the top three performers at the ABSA Top 10 Pinotage awards with seven winners in this hotly contested competition. The latest was the Redhill 2017 vintage while the 2018 vintage was a finalist in the Top 20 wines.

In addition, Frans Malan’s passion for Pinotage continues to be embraced by his descendants. Johan’s son, Michael, is the third-generation winemaker at Simonsig who heads up the estate’s red wine production.

The winery participates in the Perold ABSA Cape Blend event for good reason. “The Pinotage Association has done fantastic work, with the loyal support of long-time sponsor Absa bank, to promote quality Pinotage and Cape Blends. The competition has significantly raised the bar and showcased the exceptional quality of our homegrown variety, both as a single variety as well as in Cape Blends,” says Johan.

He firmly believes that Cape Blends will become the signature red wine blend of South Africa. “This competition brings focus to this style of wine and draws attention to it.”

Investment in the future

Simonsig’s belief in Pinotage’s prospects has spurred the farm’s investment in, for example, the 2016 planting of a bushvine Pinotage vineyard. It grows in soils of weathered shale.

“This soil type is high in clay content and what we believe is the root of our Pinotage quality. It makes Pinotage with delicious fruit intensity,” says Johan. “Our old Redhill Pinotage bushvine vineyard has received lots of attention with the involvement of Italian pruning experts Simonit and Sirch to extend its lifespan.”

“Young vines were also interplanted where vines have died, and this rejuvenates the vineyard.”

The Frans Malan 2017 is available to buy online, along with the rest of Simonsig’s extensive portfolio, via the winery website. With October 9 being International Pinotage Day, keep an eye on Simonsig’s social media channels for news on exciting activities and promotions including the opening of rare Pinotage vintages.

Simonsig is also open to the public and has a variety of wine tasting options, served with delicious charcuterie platters. The visitor centre is open daily from 10:00 to 16:00, except on Thursdays and Fridays when it is open until 18:00. 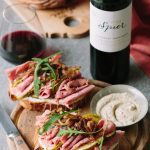