In this article, Norman Heath, Executive Chef of the Radisson Blu Hotel Waterfront, reflects on the past year and the opportunities that it has provided him and his team

You’re not going to be surprised when I say that this past year has been tumultuous. It has been exceptionally tough on our team at Radisson Blu Hotel Waterfront and, by extension, it has been tough on our families. After going through everything that we’ve been through in the past year and not having a new menu to focus on, when I was given the opportunity to do an all-new menu for winter, I thought I’d seize the opportunity to try out a few new things. I also decided to use it as a chance to test out my team a bit. Because if not now, then when?

We have been able to keep such an amazing group of young people on board. This has been important to us as we know that the unemployment stats for the youth look dire. Statistics South Africa (Stats SA) recently released its Quarter Labour Force Survey (QLFS). To say that the numbers are worrying is an understatement. StatsSA noted that the official unemployment rate among youth (15-34 years) was 46.3% in Quarter 1, 2021. It looks even worse when you take discouraged job seekers into account. Under this expanded definition, the youth unemployment rate is a staggering 74.7%.

Training young people and providing them with opportunities to grow in their careers has never been more important than it is now.

I decided to use the new winter menu as this opportunity for us. We haven’t had a new menu for two years, so we were itching to create some new dishes. And like most people during lockdown, we were using our imaginations, and trying new things in the kitchen. We think we’ve come up with something pretty spectacular.

My favourite on the new menu is the beef oxtail sausage. Using oxtail in a sausage is very unusual, so this was a learning curve for us. But the flavours are incredible, even if I say so myself, and we’re receiving very positive feedback from guests. A close second is the tandori confit duck.. I’ve incorporated some Indian flavours into this one.

Other dishes on the menu have been created by – and named after – other chefs on the team. I gave them free reign to play with their food.

Chef Dimpho was part of the Interhotel Challenge in 2019 and his new menu gave him the space to use the skills he picked up during that challenge. Pork was the meat focus during the competition and it is where Dimpho discovered an appreciation for this protein. With that knowledge, his background in the pastry section, and few attempts, he created the pork pie now found on the menu.

Then there’s Chef Luleka. I remember her interview where she started cooking a basic pastry dish, which wasn’t too complicated. If I’m honest, I wasn’t very hopeful initially. But the dish was exceptional, cooked perfectly and I never forgot it. In fact, it made such an impression that when we started with the new menu, I told Luleka we needed to create something similar. She is so proud of her dish and I am proud to put it on our menu. Luleka hopes that guests will feel her love when they bite into these salted caramel stuffed choux pastry balls.

I feel like a proud dad, seeing my team’s dishes on the menu. It’s been a hard couple of months, but having their faces light up when we said their dishes and their names were going onto the menu, was priceless.

This past year has really made us shift perspective. Yes, of course our guests mean the world to us and we love treating them to a special meal or occasion. But our team, this is our family. And we’ve used the past year and a bit to make this family stronger and better. Without one another, we never would have made it this far. I am forever grateful to them all. 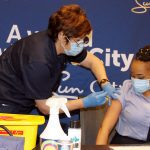