Dartnall, who graduated from the Academy in 2000 was recognised for her contribution to the South African culinary industry, especially for representing South African culinary excellence on the world stage through the various international awards, including best female chef in the world.Trapido, graduated from the Academy in 2001, and was not only recognised for her outstanding contribution to food writing and broadcasting but also for promoting indigenous South African food cultures and flavours though her various books and broadcasts.

Semenya received the award for inspiring culinary excellence, as he has established a significant following among young chefs and foodies alike, since his graduation in 2010. This has not only resulted in his first cookbook, Dijo, becoming a best seller, but he is also the South African chef mentioned most often by aspiring young chefs during interviews when applying at to study at the Academy.

Adrian Maree, chef patron of Fermier restaurant in Pretoria could not attend the event, but was recognised for his contribution to sustainable fine dining as his restaurant is part of a self-sustainable ecosystem that includes farmed fish, vegetables and even livestock that are served in the restaurant. Maree graduated from the Academy in 2006.  “Over and above the ‘conscious cooking’, Adriaan’s food is delicious art, which is why the restaurant has been named as one of the country’s top 20 on more than one occasion,” said Adele Stiehler-van der Westhuizen, MD at Prue Leith Chefs Academy.

“It is the first time that the Academy recognises its alumni in this way, but certainly not the last,” said Barnetson. “We have such wonderfully talented people in the culinary industry in South Africa and it is our pleasure to recognise and celebrate those who have made such significant contributions.”

“The South African food scene has vastly improved in the last two decades and looking at these awards, this Academy clearly contributed to it,” said Prue Leith. 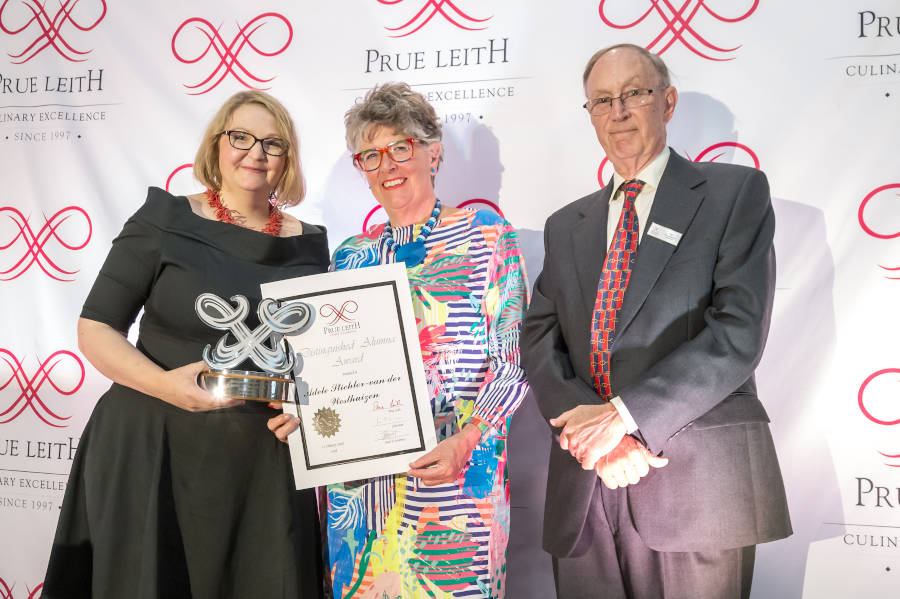 “I am delighted by the new look and direction of the institute, as food is a very dynamic field and the new brand recognises that there are many ways to be a chef. In my own career I have constantly changed what I do, but food mostly remained at the heart of my work,” said Prue Leith.

As part of the new brand, 2020 will see several launches for the Institute, the next being the launch of Prue Leith “Broadcasting” the Institute’s online food platform that will share recipes, techniques, articles and reviews through videos, podcasts and blogs – all exploring the fascinating world of food.

The Prue Leith Restaurant will also be renovated and relaunched by spring and before the end of 2020 a variety of health and nutrition related educational products will be launched as the Academy has always believed food to be the foundation of health.

Hostex 2020: What’s in store at IndustryLIVE!News, Side Bar

What’s new at Hostex 2020? New products to exploreFood and Beverages, Side Bar