Chef Stephen Fraser heads up the iconic Lanzerac Wine Estate’s kitchens, which reopened just over a year ago after extensive refurbishment. We chatted with the chef about his career thus far, sourcing products and the best thing he’s ever eaten.

Tell us about your career so far? I started in the kitchen at the age of 16 years old. It was on-the-job training at the Cardiff Hilton in Wales. After 6 months of not knowing why I was sticking it out, I found my passion and have never looked back. A year later, I followed my mentor Michel Gehrig to London to be part of the opening team at the Trafalgar Hilton. I grew to chef de partie on Saucier.

I followed my chef, for a second time, this time to Switzerland for the hotel group Kempinski in St Moritz. I was involved for the pre-opening and assisted with setting up the kitchen layout, equipment, suppliers and menus. When open, I was in charge of the hot kitchen and if Chef Gehrig wasn’t running the pass, I took up that role. This was at the age of 20, turning 21. 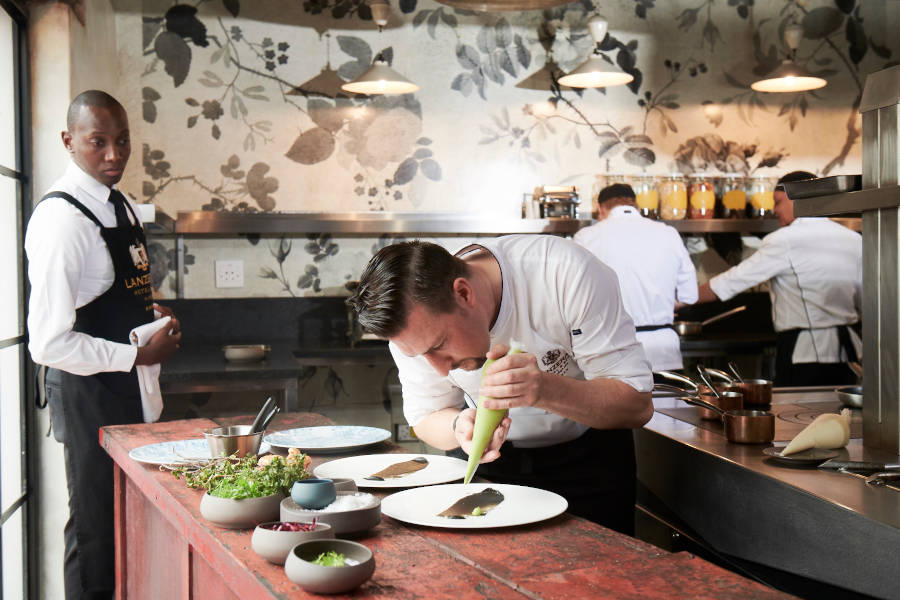 My next step was moving to Cape Town to follow my South African girlfriend at the time. I had been there on holiday twice before and had fallen in love with the Cape. I landed in the kitchen at Leinster Hall under David Higgs. Their chef had just quit and they needed to fill the position of sous chef immediately. David became fundamental in my career at that time. Not only did he help me get my work permits for South Africa, but he was also a huge inspiration culinary wise. He taught me to think outside the box and never say it’s not possible. I then followed David to Meerendal Wine Estate to help open and run Wheatfield’s Restaurant.  When David left Meerendal, I was given the role of executive chef and became responsible for all the restaurants on the wine estate.

Thereafter, I took up a position at Lanzerac Resort and Spa. I fell in love with Lanzerac straight away and felt the food side of the property was not up to par and letting the estate down. I saw this as a great challenge. Years later, new challenges still arise that keep me motivated to improve and develop, for example, redesigning the food outlets and kitchen a year and half ago and creating the Taphuis bar as a standalone venue with its own identity at the hotel.

How would you describe the style of cuisine you have on offer at Lanzerac Manor Kitchen? When we settled on the final vision and identity of the restaurant and gave it the name Manor Kitchen, I really felt that two main aspects needed to be included in the menu planning. Firstly, the heritage of the place itself and secondly, the elegant modern touches that were brought in by the designer Con Van der Colff. I really wanted to bring these two elements together. ‘Classics reimagined’ is the corner stone from which we created and planned the menu.  We’ve taken historic classical elements or dishes that have been used or seen at the estate over the years and brought them back with modern touches. 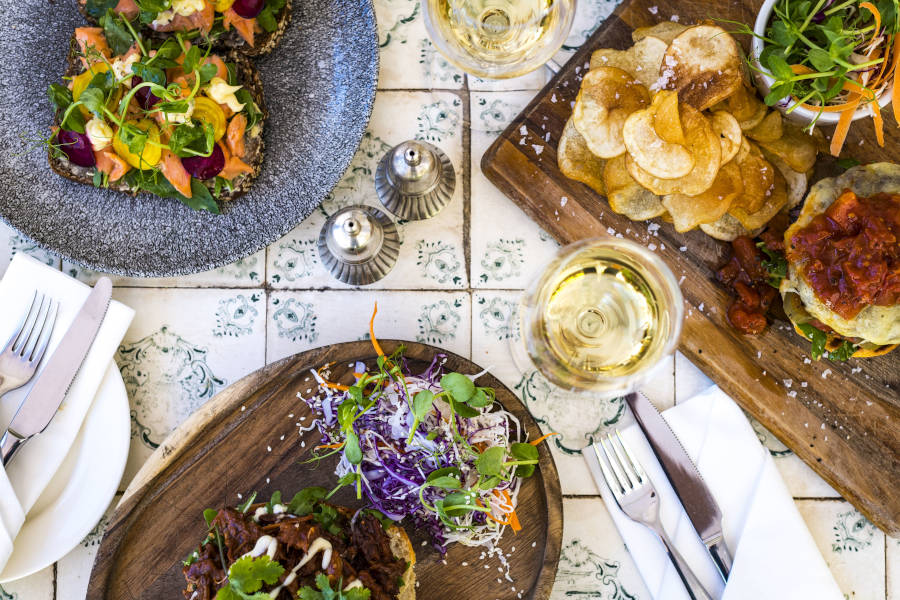 A great example of this, is the Crème Brûlée. We’ve made the Crème Brûlée flatter and wider on the plate – still caramelizing the sugar on top and, then when cool enough, created an attractive dessert on top of the Brûlée – bringing in vibrant colours, textures and floral touches.

We also looked at creating the link from a formal dining room to a relaxed family restaurant space. As it is a hotel, the need is there. We wanted a relaxed dining experience, where guests could come and enjoy the option of a four or five course food and wine pairing with our fantastic range of Lanzerac wines, but also a place that you could come with family or friends and get a simple, yet elegant line fish or lamb shank dish, served with sharing sides that come in silverware as a small nod to the Lanzerac of old.

Our menu also boasts a lot of renowned South African dishes. In the past, we found that the expectation at a five star hotel was for international cuisine and the local South African cuisine was seen as more suitable for a home cooked meal and less suitable for a restaurant. But now guests are traveling to experience the culture and flavours of their destination and to taste something different.

What is your ethos on produce suppliers and how did you go about sourcing them? I really try to use local producers at Lanzerac and have for years. I can still remember when I started here and found the cheese platters on the menu were made of international cheeses, meanwhile we had such amazing up-and-coming local producers right on our doorstep. It just meant taking the time to go and find them. This has become the case more and more over the years, like using sustainable fish over more popular fish, foraging in and around your area, or ensuring all fruit and vegetables, if not grown yourself, are grown by a reliable local supplier. 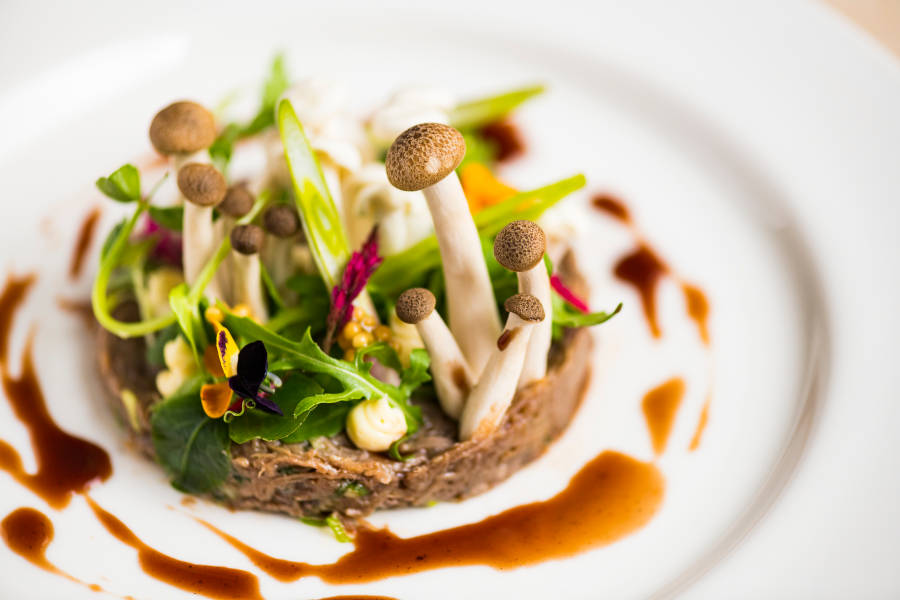 With regards to your kitchen team at Lanzerac, are there any training or wellness initiatives that you have in place? Last year, we began to enter a number of the chefs into competitions and events. We took part in the Distell Inter Hotel Challenge where I had to pick a young chef, a baker and a kitchen assistant and mentored them to create a three-course pairing menu to compete against over 30 other hotels. The team did fantastically well and made me so proud of what they achieved.  I also arranged a number of demos for the team to help inspire new ideas, and take the chefs on outings when possible, both for ideas and team bonding.

Has there been a particular moment in your career that sticks out as one that taught you a life lesson? Switzerland for me stands out.  I think it must have been on the 3rd or 4th week of me being in a new country on my own. I only knew one person at the time which was my executive chef Michel Gerhig. I couldn’t speak or understand the language the locals spoke and it was a completely different world to the life I had left back in the UK from things like currency, climate, lifestyle, and personalities – basically everything. It was very hard to see the positive. My chef was busy with a million things and I was struggling to get things done with the communication problems. This was before we even opened and the kitchen team who were coming from Europe, were even there. I was young and felt completely out of my comfort zone in the kitchen. I was ready to pack my bags and head back to the UK to what I knew and understood. But I stuck it out and I’m so glad I did. After a week or two, I was in the kitchen in my domain and no matter what language the chefs spoke, they all understood food. That was all I needed. It was such an amazing experience. I learnt so much and worked with millions of new products I’d never even heard of before. I met and worked with lots of new and great chefs, each with new techniques or ways of doing things. I learnt first that I had to be persistent and patient and not to give up when things aren’t going the way you thought they would.

Any advice for those who want to enter the industry? Yes, my advice is to travel, taste everything and question everything. The more work you put in, the quicker you will grow. You will never stop learning in a kitchen. Don’t be scared of a real challenge whether in the kitchen or in life.

What is the best thing you’ve ever eaten? One experience that comes to mind is a risotto I had in a small restaurant in Italy while on the way to Rome. I have always been a lover of Italian food but the flavour of this certain risotto left me speechless. It was a radicchio and cambozola risotto – perfectly cooked. I picked it as it was the first time I had seen anyone using radicchio in a risotto. I have used it on a number of occasions for starters or braised it – similar to chicory. I was completely shocked how well that light bitterness of the leaves cut the rich creaminess of the cambozola. It was delicious and the perfect fit. It really surprised me and left me wanting more. I believe I make a good risotto but have never achieved the taste and texture of what I received that day. 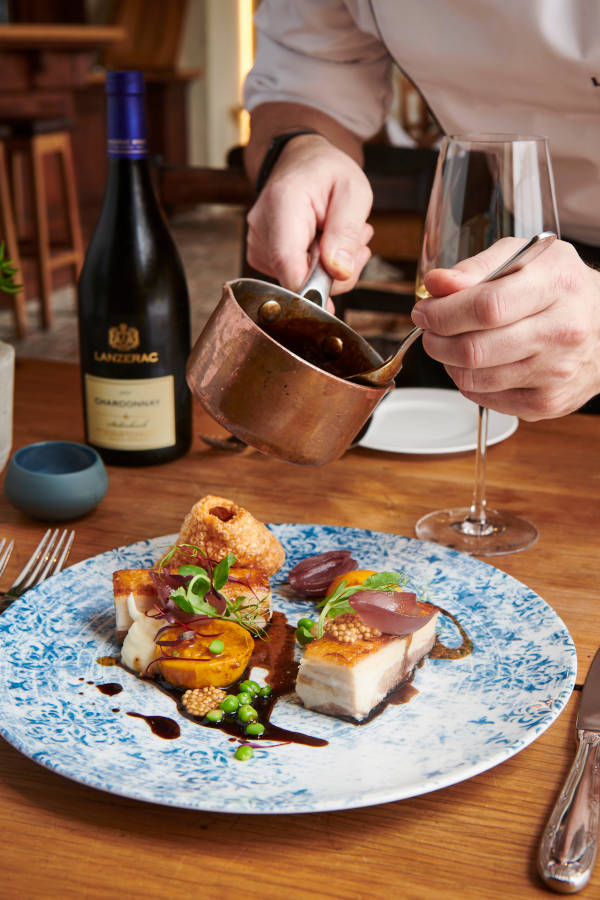 How technology shapes the modern guest culture and experienceIndustry Focus, Side Bar

BOSJES offers exclusive wines that reflect its surroundsFood and Beverages, Side Bar