Listening to his inspiring life story, Cedric Mkhize who is an HR Officer at Sibaya Casino & Entertainment Kingdom seems almost invincible. No matter what life throws at this dynamic man, he says that he has grown to see challenges as opportunities.

Cedric, who has been a sports enthusiast for as long as he can remember, played soccer on the dusty fields and streets of the farms and townships in which he grew. He often challenged other children in the neighbourhood to sprinting competitions and played rugby at primary school level, progressing all the way to professional and junior international level. However, Cedric’s life changed dramatically when he was involved in an accident which partially paralyzed him.

“Regaining my independence after the accident in 2007, I needed to get active again so I was introduced to wheelchair basketball which I enjoyed playing as I had some understating of the game having played able-bodied basketball at high school level,” tells this inspirational sportsman. After two years, he took a decision to leave the sport due to personal reasons.

Cedric could not be inactive and after a few months of no sports, a friend contacted him for a casual chat.

“We got talking about sport since he knew my sporting history and he ask me if I had heard about hand-cycling. At the time it was something I was not familiar with, but the more he spoke about it the more he spiked my interest in it.”

Not long after this and networking with other hand-cyclists, Cedric had his own hand-cycle and was back in his active, happy place. He has since taken part in some cycling competitions such the aQualle Tour Durban 45km race, four 65km Tsogo Sun Amashova Cycle Challenges recently completed his second Discovery 94.7 Ride Joburg Cycle Challenge. 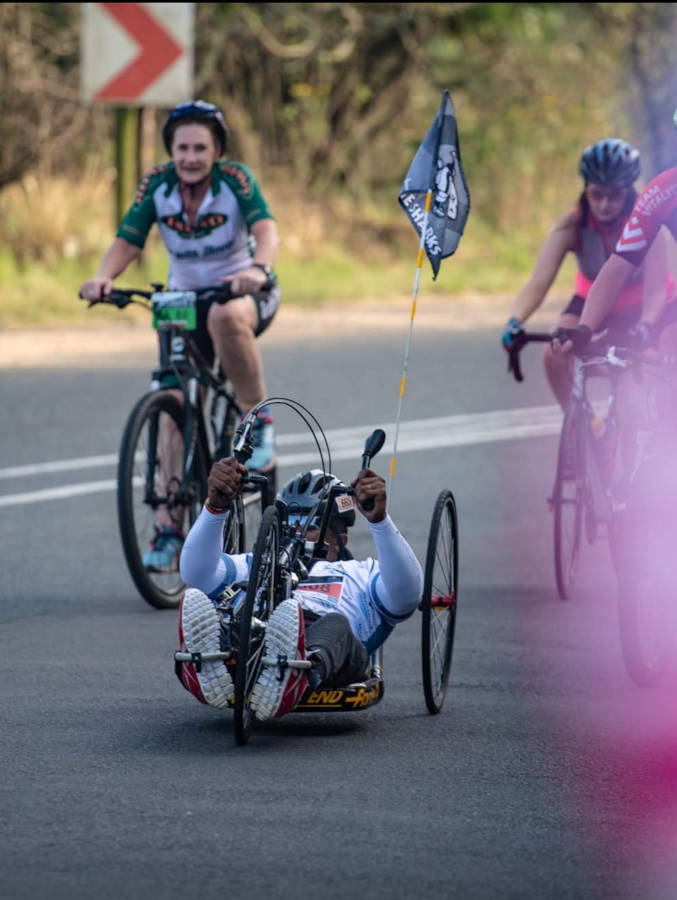 Cedric says that his biggest motivator for taking part in the 2019 Discovery 94.7 Ride Joburg Cycle Challenge was that he felt it was time to do his part in giving to those who need a helping hand in life.

“A friend of mine who is an enthusiastic charity worker and works closely with CHOC (Childhood Cancer Foundation South Africa) to help children with cancer and their families, introduced me to The Cows.”

He explains that ”The Cows” are a group of people who get active and cycle, run and swim in order to raise funds for CHOC.

“They are on a mission to make a difference to children with cancer and their families, one paddock at a time,  Armed with the slogan ‘Love Living Life’, they use their lifestyle goals to raise money for CHOC and I couldn’t be more thrilled to be a cow,” he smiles.

He does not follow a specific diet but says he just watches what he eats on a daily basis.

“Through the years I have managed to make time for my training between family and work time. In doing so, I am able to get about three to four training sessions in in a week, be it going to the gym or getting on my hand-cycle.”

This gives Cedric his nine hours of work at the office which he does with great dedication and passion and then enough time at home to see his daughter and spend some time with her before bed time.

Cedric, who has worked for Sibaya for close to 12 years, says that the accident which changed his life, changed it for the better. “It taught me to be an optimistic person in that I am able see what many people view as a negative situation as a positive one for myself and so challenges become opportunities to me.”

Although he says he is not able to run, throw his daughter in the air and catch her or play catch on the beach with her or even help her ride her own bike, he still strives to be an inspiration to her.

“I may be unable to all those things with her but  I hope she still grows up to see that her father’s ‘disabilities’ did not prevent him from achieving other things in life.”

“Sibaya appreciates Cedric’s hard work and commitment and it is an inspiration to deal with a man who is as optimistic about life as he is.  Ultimately his optimism flows into and effects his drive at work and rubs off on a lot of us,” says General Manager of Sibaya, Myan Moodley.

Op-Ed: What’s the real cost of a cup of coffee?Food and Beverages, Side Bar, Sustainability