Chef Genghis San has been appointed as the Executive Chef, AKA Lead Kitchen, of the soon-to-open Radisson RED Rosebank. He brings an impressive list of accolades with him, including winning a bursary to study at Capsicum Culinary Studio, reaching regionals for Unilever’s Junior Chef of the Year, and achieving Executive Chef status at only 25 (he’s now 31).

“My dad was a chef and my mom was involved in the industry too, so cooking has always been part of my story,” says Genghis. “If I’m honest though, I didn’t think I’d be a chef one day. I always thought it’s not for me, but after working in a few kitchens and trying other fields, I came back to cooking and I’ve never looked back.”

With just a few weeks to go until Radisson RED Rosebank opens its doors, the chef has his hands full.  “I’ve worked in new hotels before, but this one feels different. This brand aligns perfectly with who I am as a person and I’ve been given free rein when it comes to setting up the menu.”

The menu has been left entirely to the chef, with the only caveat that it needed to feel similar to its sister hotel in Cape Town. And Chef Genghis has clearly taken the ball and run with it: “Guests are going to find some odd combinations on this menu,” he says. “But I promise that even though the flavours might seem wild, it’s delicious and all of the dishes are worth trying!”

One of these “wild” flavour combinations is the grilled salmon on balsamic and honey-glazed strawberries, which will feature on the banqueting menu. He’ll also showcasing his interest in African and Asian cuisine, which was sparked shadowing his dad in Portuguese, Chinese and Afrikaans restaurants in his youth.

“My team and I can’t wait for locals and visitors to taste what we have put together at Radisson RED Rosebank. The menu truly is something special. The hotel and everything it offers promises to be a destination in itself. There is the OUI Bar + KTCHN, the grab ‘n go bar for those wanting a quick drink or snack between meetings in the area and the RED Rooftop, which will have a selection of share plates, cocktails and DJ sets.” 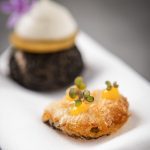