FEDHASA has welcomed today’s Supreme Court of Appeal judgement in favour of Ma-Afrika Hotels and Stellenbosch Kitchen saying that “justice has finally been served”.

The decision means that Santam is obligated to pay Ma-Afrika Hotels and Stellenbosch Kitchen for the full 18-month period of its policies, and provides much-needed certainty for the finalisation of outstanding claims for businesses in the tourism and hospitality sector, who have had to wait more than 18-months for valid claims to be settled.

Says Rosemary Anderson, FEDHASA Chairperson: “We are thrilled to hear that justice has finally been served and that companies like Ma-Afrika Hotels and Stellenbosch Kitchen will receive what they honestly contracted with Santam for – business interruption cover for 18 months.”

Anderson said that FEDHASA was saddened by the number of companies which could not hold on any longer and were forced to close because Insurers did not pay out their business interruption cover when they should have.

“The very term ‘business interruption cover’ means you will be paid our while there is interruption.  Santam and others like them did not honour this and they are very unlikely to be ever forgiven for the arrogant, cruel and damaging stance they took which caused the loss of so many livelihoods and entrepreneurs’ life savings.

“The is especially so heartless since at Santam’s AGM in July 2020 – they assured stakeholders that should they have to pay out on business interruption – they will be fine.” 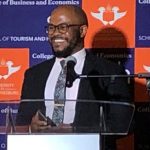