26-year-old ‘Mama Kate’ of Rockville in Soweto is determined to uplift the women and girls in her community through the basics of baking.

Becoming a mother to two young boys early on in life and assuming the role of the sole bread winner in her household, Kate Msomi realized the potential cooking had not only for her but those around her.

“I saw how young girls are forced into the household chore of cooking for the family but never progressing from there. While there’s often an obvious need for women to be at home with the children, I soon discovered that if they could be earning an income while childminding that could open up doors for them that were never there before.”

It started off as a passion project, born from her love for cooking. After acquiring a bursary to the International Hotel School and receiving an Advance Diploma in Culinary Art level 2 and Certificate in Culinary Arts level 2, Kate went on to become a Pastry Chef at the Radisson Blu Hotel Sandton’s Vivace Restaurant. It is there that she has worked her way up from trainee to pâtissier in the last 6 years. Kate is now the head of pastries and has worked alongside the Executive Chef, Tristan Letouf, in developing recipes and the first vegan menu for the hotel restaurant. 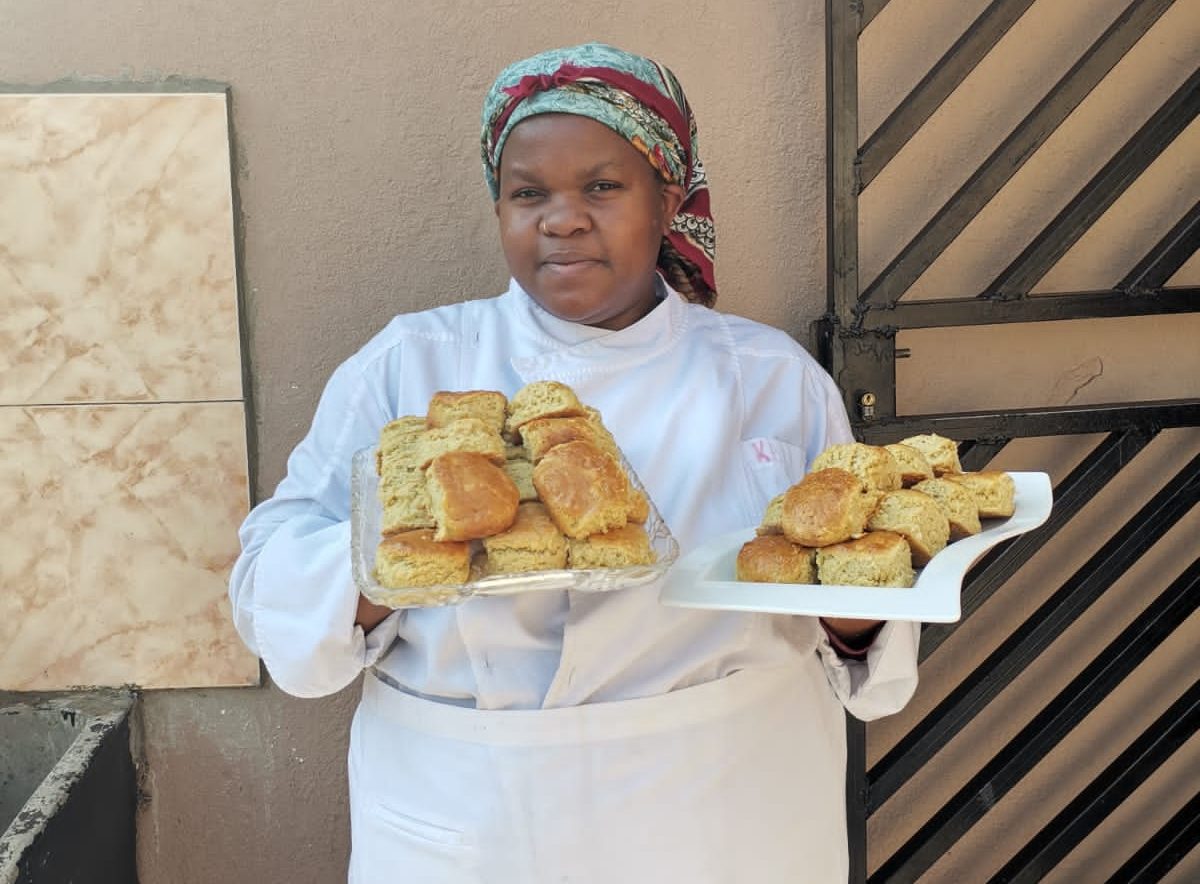 Now, once a month “Mama Kate” as she is affectionately known in her community, rounds up her neighbours into her kitchen in Rockville and teaches them the basics of baking scones, breads, dombolo, vetkoek and queen cakes. Taking it a step further, they head out to the nearby taxi rank where they sell their confectionary to passerby’s.

“With the profit, I ask the girls to write a list of essential groceries needed at their homes, we head to the store to buy in bulk, and from there we share the food amongst us. We focus on non-perishables that will go a long way such as maize meal, sugar, milk, beans and tin fish. These young ladies tell me how they feel so proud of their new skills and feel valued for being able to contribute to their households.”

Always with a goal in mind, Kate wishes to one day open her own bakery, “It is my dream to open my own bakery which will teach people, especially women, to use baking as a tool to not only end hunger but be profitable and more successful in their own lives.”

Describing her experience in the male dominated cooking industry she says, “It’s been one hell of a rollercoaster because it is a male dominated industry but I’m passionate about this career, nothing will stop me. Don’t let anyone make you think twice about becoming a chef. It is tough but as you enter this career it amazing how quickly you learn. Do what you love, and the rest will follow.”

To Kate, being a woman means many things but mainly being capable of handling anything life throws at you, especially in the kitchen.

Mentorship in action at TTK FledgelingsChef Mag General, Side Bar