TEQUILA! Yes, the delicious, often golden tipple that all of us admire, indulge and trust in. Although many trends in the beverage industry have come and gone, tequila has always been a staple in any great bar with consistent sales. But what exactly is tequila and how can you tell a good one from a kak one? In this article, we discuss the infamous cousin to mescal and make sure that the next time a brand ambassador says he’s selling the best tequila in the world, you can call bullshit.

So, let’s first understand what makes it real tequila. Among many legal guidelines, the below outlines the production of a true tequila:

If it doesn’t conform to the above, the spirit is not a genuine tequila and is called a Mixto, which is made by using at least 51% blue agave spirit and then usually mixed with a neutral highly distilled spirit such as a cane spirit or one from corn. This spirit may be aged slightly or altered with flavours such as caramel. Sometimes they’re hard to tell apart from genuine tequila, as the producers will label the bottles something along the lines of “Made from 100% blue agave” or “Made with 100% blue agave”. Some of them will be cheeky enough to also use the word Tequila on the bottles. But, at the end of the day it’s just a commercial, high selling and generally sweet spirit shooter, so don’t be fooled!

Another thing that stands out about tequila is that it’s not a full-strength spirit, at least not according to us boozy South Africans. It’s ABV is generally only around 39% and not the legal (and world’s highest standard) of 43% here in SA. As a result, it’s labelled as a spirits aperitif.

Contrary to popular belief, it’s not an upper! Tequila, while being flavoured by the original blue agave mash, is still very much ethanol, and ethanol is a depressant, both on the nervous system as well as the emotional activity in the brain. It is however a potent inhibitor, which means it’s going to make you want to do things that you wouldn’t normally do. 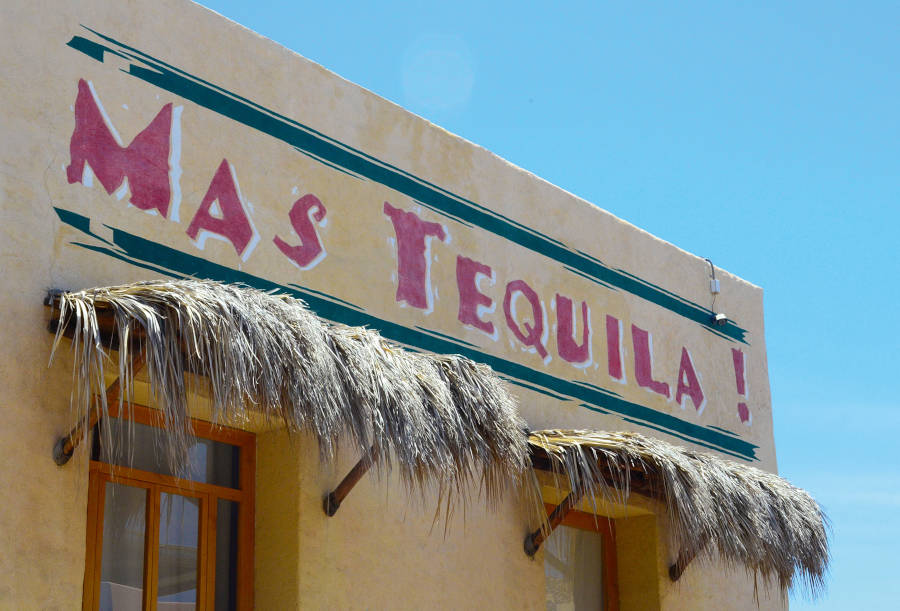 Another misconception of this naughty little spirit is that its Mexico’s national drink. Mexico’s oldest spirit is in fact Mezcal, sometimes referred to as tequila’s smoky cousin and known for the infamous “Worm” in the bottle (actually a Larvae that feeds on the blue agave cacti).

When choosing a tequila from a menu or a liquor store shelf, here is what to look for in terms of the different varieties:

BLANCO TEQUILA: also known as silver or plata tequila, this tequila is unaged, typically bottled and packaged directly after being distilled. Some distillers allow the spirit to settle and finish for a few weeks in the tanks before bottling, they refer to this as resting. This simply allows for distillate particles settling in the tanks, but it doesn’t really do anything to the flavour. This tequila is in its purest form and features the truest flavours of the blue agave plant since it hasn’t been aged in barrels. Some distillers call blanco tequila ‘the essence of tequila’ because it offers the most genuine appeal of the blue agave’s natural sweetness.

REPOSADO TEQUILA: This tequila is known as “aged” or “rested – and like Stifler’s Mom, age counts! Regulated by the Mexican government, reposado tequila is aged in oak barrels for a minimum of two months, but less than a year after being distilled. This gold-coloured spirit is typically aged in white oak and French oak barrels where resins and tannins shape the flavour of the tequila. Many different types of wood barrels give the tequila different flavours since the barrels were previously used to age other spirits such as wine, cognac, whiskey, or bourbon.

AÑEJO TEQUILA: Añejo means “old” in Spanish, and añejo tequila is aged a minimum of one year, but less than three years in oak barrels. The Mexican government states that to be considered añejo, the tequila can only rest in oak barrels with a maximum capacity of 600 litres. This tequila is generally aged in whiskey barrels, French oak casks, or cognac barrels. Compared to reposado, añejo tequilas are darker in colour, more complex, richer, and smoother in flavour. Known as vintage tequila, the amber-coloured spirit is typically seen as a sipping tequila.

EXTRA AÑEJO TEQUILA: This ultra-aged liquor has only been recognised since 2006 when the Mexican government named “extra añejo” tequila. The extra añejo has the same exact distilling and aging process as añejo tequila except that it aged longer. This tequila is classified as one that is aged for more than three years. It still must be aged in a barrel that doesn’t exceed 600 litres. The ultra-aged tequila is darker in color than añejo with a dark mahogany shade. Because of the lengthy aging process extra añejo is the most expensive, but it will be the smoothest tequila. After the aging process, the alcohol content must be diluted by adding water.

Ruben Gooranah takes over as Acting GM at Time SquareNews, Side Bar