Chef Andrew Atkinson, the former head chef of the Michelangelo Hotel and the Hyatt in Rosebank Johannesburg, has taken on a new role at the still-under-construction Kruger Shalati Precinct. Based at the Kruger National Park’s Skukuza Camp, the exciting new development is set to change the food and beverage scene in the park.

Food & Beverage will be a huge part of the Kruger operation, so Chef Andrew was a natural fit as the group executive chef for the Kruger Shalati Precinct. “With Chef Atkinson on board, we know we’re going to be able to offer unique and fantastic food options for all our visitors – something which has been extremely important to us right from the start when we started dreaming about what these products will look and operate like” comments Judiet Barnes, Kruger Shalati Concession General Manager.

Andrew is thrilled to be part of the opening team. “Whenever you take over a kitchen, you’re able to put in all of the knowledge that you’ve accumulated over the years. But you don’t often get a brand-new opening which allows you to have a say from the beginning. So that really excites me.”

“The essence of the Kruger Station, is that it’s going to be a celebration of the historic Kruger Park, while we pay homage to the modern-day visitor. We are bringing the best dishes from around the world to the safari, creating a delightful food experience so unique that it can only be found here – easy boutique dining, but in a South African way,” says Andrew.

Andrew has been testing out suppliers over the last 3 months to make sure the produce is the right quality. Meat is being sourced from a butchery in Hazyview, cheese, cold meats and dairy from Kavalier Cheeses, and baked goods from local bakers, Sipho Mavundla and Believe Mavundhla who will be relocating to the Kruger Station to be mentored by Andrew and the operations team. “The passionate response I’ve had from people here has been incredible,” says Andrew.

“Whenever you take over a kitchen, you’re able to put in all of the knowledge that you’ve accumulated over the years. But you don’t often get a brand-new opening which allows you to have a say from the beginning. So that really excites me.”

The boutique hotel which is set to open early late this year will have a finer dining focus at its Bridgehouse restaurant. The restaurant will only be open to guests, and the hotel will have a total of 24 rooms (two rooms in each of its 12 carriages). While the menu hasn’t been finalised yet, Andrew is envisioning a table d’hote where the menu changes according to seasonality and what the chef is inspired by at the moment.

The Kruger Station, on the other hand, is open to the public and the converted train station has been overhauled to create a real food emporium. There’ll be a sit-down restaurant (3638 Restaurant, housed in the permanently-stationed locomotive that runs the length of the station), the En-Route Deli for ready-made meals and meals to go, and the Departing Soon Café, with organic coffee and soft serve ice creams. “The price point is going to be on par with other food that’s available in the park, with some items a little more affordable,” says Andrew, “The service is going to be great, the quality is going to be great. Just as I would do for a 5-star hotel, I’ve planned it for this property – but at an accessible price point.” 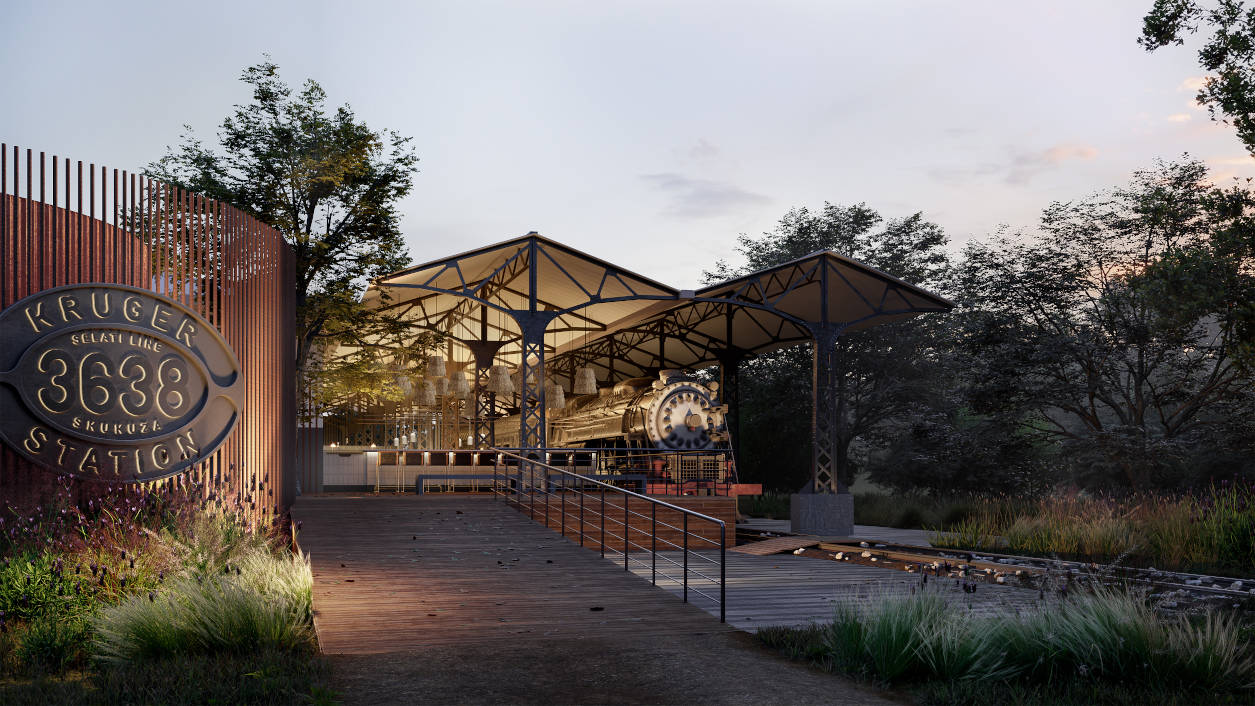 For the menu at the Station, Andrew is aiming for finer food using quality, local ingredients, served in an unpretentious setting. The pizza will be made in a huge wood-fired pizza oven visible in the open kitchen, an old-school pot pie or pasty will be made with available game, and diners should be prepared for the best burger they’ve ever tasted. “When we do simple things like a burger, I’m not just doing frozen patties, I’m doing proper smash burgers, with meat ground down on grind no 4 through the mincer,” says Andrew. “200g of pure beef only taken from silverside and topside mince – we want people to say wow, that was the best burger I’ve ever had, and I had it in Kruger, in South Africa, in the bush!”

In the sit-down restaurant, Andrew has reimagined favourite dishes from the train’s history. “I’ve gone back to look at the menus from the train 50 years ago, and we’ve even spoken to people online who used to travel on the train up to Kruger, and asked them what their favourites were,” says Andrew. Top of the list was grilled crocodile steak which Andrew has updated as a crispy parmesan-encrusted crocodile schnitzel. The butternut soup is now handmade fettucine with crispy sage, cubes of roasted butternut and butternut puree, and the smoked salmon salad is now a Machadadorp trout pâté with braised fennel and flatbreads.

“We want people to say wow, that was the best burger I’ve ever had, and I had it in Kruger, in South Africa, in the bush!”

Throughout the station, gluten-free and vegetarian diners will also be catered for, as will the whole family. As an added extra for adults, while the kids can have an ice cream cone at the parlour, mom and dad can add a shot of something boozy in their milkshakes. Grab and Go meals from the En Route Deli like baguettes and wraps can be taken on a daily game drive, and, cleverly, Andrew has developed meals for overnight guests to heat up on the braai when they’re back at their accommodation. “I’ve designed all the meals to work within camping and fireplaces,” says Andrew. “When people come to Kruger they light a fire, they’re in the bush. So I’m not going to design meals that you would need to heat or cook in a frying pan or in the oven. I’ve done items like lamb boboties, sweet and savoury roosterbrood, and a naan bread with a butter chicken that you can just pick up and heat in foil on the side of the braai.”

When it comes to game, Andrew plans to use the meat at his disposal, with talk of warthog sausages for breakfast and a shisanyama prepared in an open section of the restaurant, where game dishes like springbok loin, crocodile or kudu shank potjie are served family style.

Andrew expects the entire precinct to require a staff complement of 200 when both the station and hotel are open and at full capacity. The management team is looking to the local communities for the bulk of the Kruger Shalati Precinct staff, and Andrew is looking forward to training his kitchen team, as training is something he’s passionate about. “As the management team for these prestigious projects, we have strong beliefs in the need to develop people through training and exposure to activities outside their actual roles, so the company, the individual and the country benefits. It’s a philosophy I thoroughly endorse,” he says.

An open letter to the president from the Sit-down Restaurant IndustryNews, Side Bar

RCL FOODS partners up to help the restaurant industryIndustry Focus, Side Bar